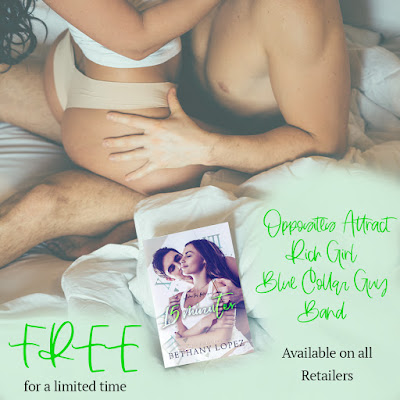 ⇝Raised to be the "perfect" wife, Victoria has spent her days maintaining her impeccable outward appearance and her nights mingling with the rich and entitled. When her engagement to Scott ended, Victoria thought she'd be rid of him and his circle of friends forever, but a chance encounter with Brock will change not only the way she sees him, but the way she sees herself.🍷

⇝Brock is a man who's happy and content with his life. A surrogate parent to his now-adult brothers, he spends his days running the company he built himself and his nights playing in his brothers' local band. When he runs into Victoria in the bar after a show, sparks unexpectedly fly, and he's interested in seeing where it goes.🎸

⇝But can the man who's happy with his life, convince the woman who always wants more, to give him a shot with only 15 Minutes on the clock?⏱
Posted by Bethany Lopez Author at 10:44 AM