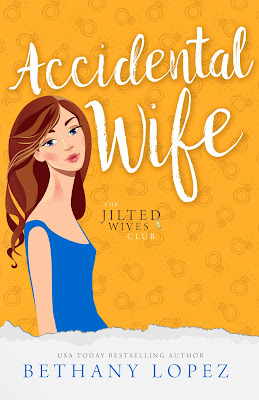 Accidental Wife, The Jilted Wives Club, Book 5
Release Date: January, 26, 2023
Add to your TBR
USA Today Bestselling Author Bethany Lopez brings you her break-out series about getting a second chance at love later in life. Follow Whitney, Summer, Margo, Charlotte, and Andi as they experience the good, bad, and ugly of dating again in their thirties and forties. Join them in The Jilted Wives Club.
When you find out you're still married to your ex, beer will not suffice... go straight for the whiskey.
Years ago, Andi and Callum got married in Vegas on a lark and quickly got the marriage annulled. At least, that's what Callum told Andi would happen. When she finds out Callum never went through with the annulment, she finally understands why their families have always been at odds. The Turners cannot be trusted.
Callum always had a thing for Andrea Addison, and their weekend in Vegas was like a dream come true. When he returned home, he had every intention of following through with the annulment as promised, but part of him wondered if this was just what he'd needed to show Andi how good they could be together. Unfortunately, he had no idea how hard it was going to be to come clean.
Six years later, Callum has finally realized he needs to move on and leave Andi behind. He's sure once she gets over the initial betrayal, she'll happily sign the paperwork and leave the past behind them.
Andi, however, has other plans. Why should she make things easy on Callum? He was the one who lied, after all. She may as well let him sweat a little and have some fun in the process. She'll make sure Callum sees just what he's been missing. If he wants to move on now, he'll have to meet her list of demands first.
Preorder Now:
Universal Link
Posted by Bethany Lopez Author at 8:01 AM