I am pleased to be a part of the Cover Reveal of Astarte's Wrath by Trisha Wolfe. I'm happy to say that Trisha is one of the first writers I met when I joined this community over a year and a half ago. She is a wonderful writer and a great supporter of writers! 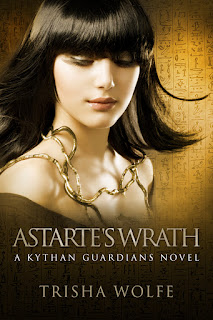 Set against the backdrop of the Battle of Actium, in the city of Alexandria, Star struggles with her guardian duties as her feelings for the newly named pharaoh of Egypt grow deeper. Not only is Caesarian her duty, he’s the son of Cleopatra, and he’s human. All of which makes their love forbidden.

But when a conspiracy linked to Caesar creeps its way into Alexandria, Star must choose between helping her fellow Kythan free themselves of their servitude, and protecting her charge—the last pharaoh—while Egypt burns around her.