Turning the big 3-0 isn’t easy. It’s even more difficult when well-meaning friends decide you need to stop being single and find your Prince Charming. Add in a series of never-ending bad blind dates and this is all too familiar territory for Gracie Marquez.
What Gracie’s friends don’t know is that she’s been in a nine year “friends with benefits” relationship with her best friend, the dashing Henry Huntingdon the Third. The pressure of turning another year older has Gracie questioning the nature of their relationship. Emotions run high and jealousy threatens to tear them apart. Has Gracie’s Prince Charming been in front of her eyes or has Henry been keeping her from finding true love?

Henry pulls away to lead me down the street toward Covent Garden. “So, Leticia strikes again?” he asks, referring to my date before a short pause. I nod. “Who was it this time?”

“A guy from the city,” I answer, hoping he’s leaving it at that, though, knowing Henry, he’s going to scratch at this piece of information until he’s managed to get all the dirty details. Henry’s eyes widen and amusement sparkles in those mischievous blue eyes. “A guy from the city,” he repeats before bursting into another fit of laughter.

“Yes, Natesh,” I groan, refusing to continue looking at him.

“Someone who works with her husband?” he presses on, having way too much fun. “Doesn’t she know that you hate snobby types?” Henry asks, his voice taking on an accusatory tone as I finally glance at him and smile. “From now on, you should tell her to consult with me before fixing you up on any more blind dates.”

“Definitely,” I agree, but the sarcasm in my voice makes him glance my way with a playful smile on his lips before looking away. “He didn’t stop talking about his Mom.” I sigh, going for a dramatic tone. “And how he likes the very best.”

“Wanker,” Henry replies before letting out a loud chuckle. “Speaking of mothers,” he starts as I throw my hands in the air.

Henry’s been trying to get me to see my parents for the last few months. The way this conversation always starts is by him saying those exact words: Speaking of mothers. I don’t want him to meet my parents or my American friends in person. He’ll charm them all and then my mother will fall in love with him and wonder why we’re not a couple. Shouldn’t it be enough that they know he’s a really good and close friend of mine?

“Not yours,” he tells me, flicking at my nose with a teasing smile before he looks ahead. “My mother said that if you’re still single by Christmas, we should both go to visit her in Germany,” he tells me as we make a left and walk for a few minutes until we find the small shop that sells crêpes and waffles.

“Who is she going to pair us up with this time?” I ask, meanwhile my voice, full of dread, is met by the amusement spreading quickly over his features.

Sometimes I hate him.

“Get this: her neighbor has a son and a daughter, both single,” he replies.

“No, thank you. Remember Hans? I’m done with Germany,” I remind him and he laughs harder, pulling me with him inside the cafe.

Henry’s arm has maneuvered around me while we wait in line. My body’s against his as his hand rests against my back. His lips brush lazily against my temple, sending my pulse into overdrive.

I force my eyes on the menu board, ignoring the way his lips brush against my ear. “It’s too bad you’re out of service,” he says, changing the subject. His voice is lethal: deep and soft. It makes me melt like vanilla ice cream under hot fudge. The weakness returns to my knees and my mind goes into a lustful haze. However, it doesn’t take long for something to stir me out of it and let the full weight of his words fall on me.

“What?” I ask, trying hard to escape the obscene look in his eyes, which makes my body hum with renewed energy.

“Well, I’d rather eat the Nutella off your body.” 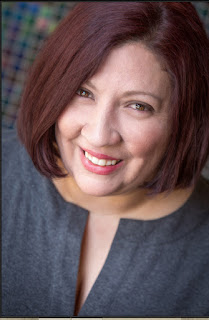 MarilynJeulin is the author of Henry and Gracie.
Born in the Wild West and raised in a tropical paradise, Marilyn has always had a thirst for a good story and adventure. She’s a huge fan of Anne Rice, Stephen King, GRR Martin, and JK Rowling.
Mom of two boys, and wife to the Frenchman, Marilyn is also an avid gamer, who
spends way too much time on Facebook and Instagram.
Her next title, Closer to the Edge, is a
New Adult thriller involving a rock god, a transatlantic vacation, and a terrorist attack. Closer to the Edge will be the first book in the Estevez siblings’ series, and will be available: 2018.
Connect with Marilyn:
Email: marilynjeulin@gmail.com
Facebook: https://www.facebook.com/authormarilynalmodovar/
Instagram: https://www.instagram.com/marilyn_almodovar/
Twitter: @LynAlmodovar
Website: www.marilynalmodovar.com

Posted by Bethany Lopez Author at 2:46 AM