Trophy Wife is Now on Audio! 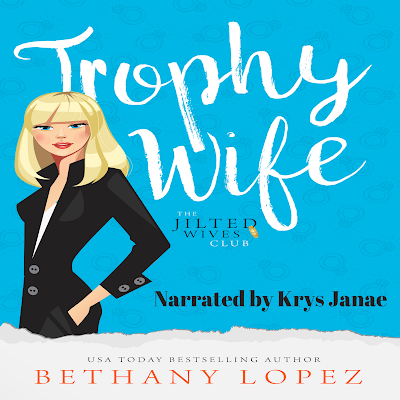 Audio Now Available!
Narrated by Krys Janae Voice
USA Today Bestselling Author Bethany Lopez brings you an all-new series about getting a second chance at love later in life. Follow Whitney, Summer, and Margo as they experience the good, bad, and ugly of dating again in your thirties and forties. Join them in The Jilted Wives Club.
When at first you fail at love, medicate with Dirty Martinis…
Summer has always tried to look on the bright side of things. Sure, her ex-husband was a liar and a cheater, but that didn’t mean all men were untrustworthy, right? Maybe the problem wasn’t her, but the type of man she’s always going for.
Noah would rather spend his nights at home with a good book than out navigating the dating scene. Women like Summer have always terrified him and there’s no denying she’s way out of his league. But when she keeps popping up everywhere it becomes harder and harder to deny their chemistry.
Summer wants to prove she’s more than a Trophy Wife. Sure, she’s sexy, sweet, and has a body that won’t quit, but she’s so much more, and she’ll do whatever it takes to prove it to Noah.
Has Summer finally met her match, or will Noah leave her crying in her Dirty Martini?

Posted by Bethany Lopez Author at 9:32 AM