Cover Reveal of Damsel Not by Kristina Circelli 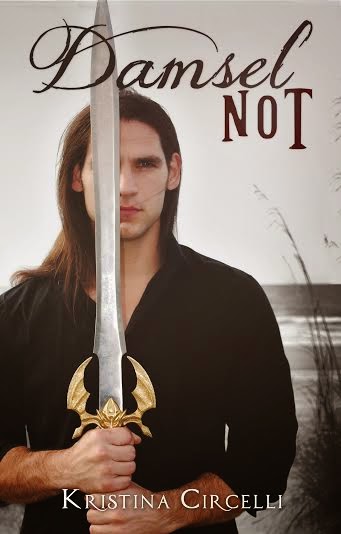 In the days of old, one knight fought to save the maiden he loved – a battle that ended in a bloody promise for the future.
In the days of the 21st Century, Izz doesn’t believe in prophecies. A recent widow, she struggles to find the passion that once fueled her life – a passion that is reignited the day a knight in disguise cuts into her life in a flash of swordplay and seductive grins.
Izz doesn’t want to love him. The guilt of moving on nearly crushes her, yet she finds herself unable to resist the touch, the feel, the scent of the man who leaves her breathless with just one look. But each day Izz finds herself drawn to Cade, the more danger she finds herself in, for someone believes Izz to be at the center of an ages-old prophecy – and will do anything to stop it.
When threatening messages turn even more dangerous, Izz must rediscover a part of herself she’s never known before and fight to save her knight in shining armor. With only a sword passed down throughout the generations to guide her, Izz must prove to her adversary that unlike maidens of old, she will never be a damsel in distress.