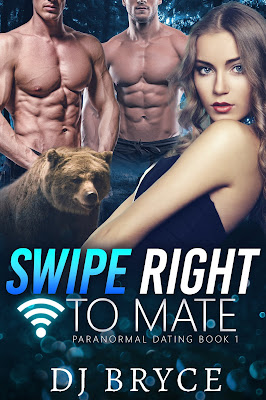 Victoria is floundering. She's lost her home, her boyfriend, everything... rather than go back to her parents with her tail tucked between her legs, or inconvenience her best friend, she decides to take matters into her own hands.

When she comes across a mating app, Tori thinks she may have just found a way to solve all of her problems, and maybe, just maybe, find love along the way.

A trial period with Mal, the sexy bear shifter who contacted her seems like the answer. But, when she gets there and realizes it's not only Mal she's there to meet, but also his best friend Kai, will this opportunity be more than this human bargained for?

Swipe Right to Mate is the first in a new trilogy by DJ Bryce and Terra Wolf. This is a menage standalone about a desperate woman finding exactly what she needs, where she least expects it.

Katja is lost. After finally dumping her douche of an ex, she thought she had things figured out. A job as a nanny, which offered room, board and stability. But, when she loses that, Katja realizes she's left with nothing.
When she comes across a mating app, Katja hopes she's found a way to dust herself off and start anew. She's not looking for love, just companionship and a place to call home.
Bane lost his mate five years ago and has since lived his life for his daughter, Sloane. Now that she'd getting older, he's realized that Sloane needs more than he can offer, so he allows his friends to talk him into joining the mating app that changed their lives. The only stipulation, is that the women he meets have to pass his tests before they can meet his daughter, and need to know they have no hope of winning his heart. 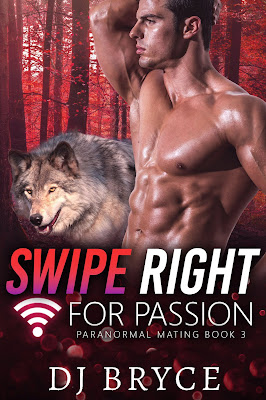 Shonda is lonely. Over a decade ago, she'd fallen for the man she knew was her mate, only to have him flee the pack and never return. She's lived her life on automatic. No boyfriends, no excitement, only work and friends.
When she learns that the man she loves has joined a mating service and has an active profile on the app, Shonda knows this may be her last chance to be with the man who's always owned her heart, even if she has to lie to make it happen.
Grayson likes being alone. He has his farm, his solitude, and the occasional visit from his brother, Bane, and Bane's family. For years that has been enough, but now... Gray wants more. Not ready to leave his land, he decides to follow in his brother's footsteps and try to find a mate. He just needs someone who'll be okay living on the outskirts of society.
Swipe Right for Passion is the third in a new trilogy by DJ Bryce and Terra Wolf. Can two people who missed their opportunity at fate get a second chance at their happily ever after?