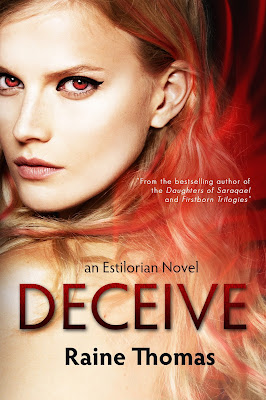 When the elders imprisoned Metis, they took every precaution to protect the Estilorian plane against her evil.

Now she’s escaped, and no one is safe. Fueled by hatred, she wastes no time imposing vengeance on those who captured her. She knows the surest way to destroy their lives is by taking what they love most, and she begins with a child named Eden.

Years later, Eden remembers none of her former life. She serves her “Master,” unaware of the family still searching for her. But as her eighteenth birthday approaches, memories begin to surface, and she questions her circumstances for the first time.

Eden’s confusion mounts when she’s joined by Connor, a handsome Elphresti male who reveals things that shatter her reality. They’ll end up on the run, knowing they can trust only each other. After all, Metis will stop at nothing to get them back, and she thrives on her ability to deceive. 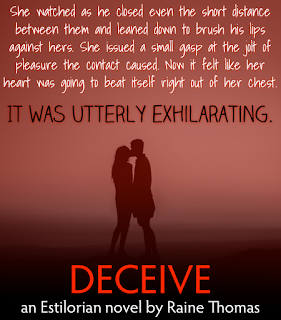 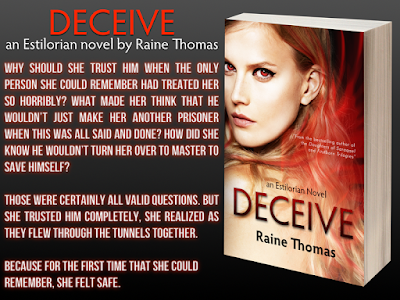 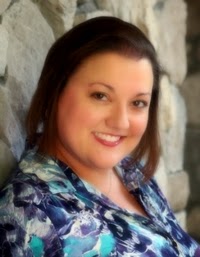 The child
laughed and nodded, making her blonde curls bob. Hatred burned bright and hot
in Metis’ chest as she
watched the interaction. While she had been imprisoned, the Mercesti elder had
been living a
life of pleasure with his avowed…the Kynzesti female named Tate. They and their
companions had robbed
Metis of thirteen years of her existence.

They didn’t
deserve the family they had made. They didn’t deserve happiness.

She was
determined to take it from them.

Zachariah’s
gaze suddenly shifted to the tree where she stood. Metis darted out of sight
and stood absolutely
still. She had to force herself not to flee and reveal herself. Fear had her
heart thudding in her chest.

Her own
reaction infuriated her. He would not hold that kind of sway over her, she
silently vowed.

Soon enough,
he would be the one who was terrified.

Metis dared
another glance and watched the boy, Ryder, rush back and tug on his father’s
tank top. She was relieved
when Zachariah’s attention turned from her position.

“Eden should
be with Mommy,” the boy said, glaring at his sister. “She’s inta-ruptin’ you
too!”

“Enough,
Ryder.” Zachariah lowered Eden to the ground, brushing his hand absently over
her hair in a way that
confirmed to Metis that he held affection for her. “Take your sister with you.
Uncle Tiege will keep an eye
on you both until I finally finish this bloody conversation.”

Metis didn’t
hear Zachariah’s response. She was too focused on the smaller female, who had
apparently lost
interest in the conversation. The child bent down and picked up the wooden
sword that was nearly the same
size as she was, gave it a curious look, then tossed it back to the ground. As
Derian wisely bent
to pick up
the sword to keep it out of reach, the girl skipped away.

In an
instant, Metis’ plans changed. She realized that she didn’t have to kill the
Mercesti elder to get her revenge.
During her imprisonment, she had learned about the sentiment Estilorians
harbored for each other. She
had learned how to use that kind of useless emotion to manipulate her captors
and escape.

She knew she
could take something from Zachariah. Something that would hurt just as much as
peeling his flesh or
ripping out his heart.

Just as
Derian started after the child, Metis stepped out from behind the tree. She was
watching the little girl,
but registered that the Mercesti commander hesitated. The child’s gaze lifted
to Metis as she stopped in
front of her. She started to smile as Metis reached for her, but then her
expression froze. Realizing
the child sensed danger, Metis acted quickly, grabbing her before she could
run.

Zachariah’s
desperate cry had all activity in the area ceasing. Metis met his gaze an
instant before she teleported
with the screaming child in her grasp, and she knew she had been right. It was
the Mercesti elder who
was now terrified.

He knew he
would never see his little girl again.