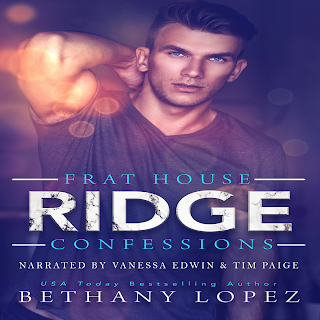 🔥The Audiobook for Frat House Confessions: Ridge is LIVE and absolutely FANTASTIC!!!🔥
🎧Narrated by Tim Paige and Vanessa Edwin🎧
Audio Links:
⤖Audible
⇢Amazon
🌟Blurb🌟
She has a broken heart and revenge on her mind...
Last year Karrie was riding high. She had a boyfriend she loved, a softball scholarship, and the best roommate a girl could have.
When it turned out her man was a lying, cheating ballsack, she may have gone off the rails a bit.
Now, it's a new year and Karrie's ready to build herself back up and move on to bigger and better things.
Still, a little revenge would go a long way in helping the healing process.
He's got a plan for revenge that will suit them both...
Ridge is used to being the BMOC. Sergeant of Arms of his frat and the ability to land any chick within snapping distance has made life pretty easy for him.
His home life is another story. He and his brothers are in the middle of a battle between his socialite mother and asshole father.
Ridge is looking for a stand-in to placate his mother and her matchmaking ways, and he has a feeling he's just met the girl he can perfectly mold.
This makeover has nothing to do with love and everything to do with Karrie and Ridge using each other to get what they want. What starts as a ruse soon becomes an attraction they cannot deny. When it's all said and done, they'll both have more to confess than a need for revenge.


Posted by Bethany Lopez Author at 9:06 AM