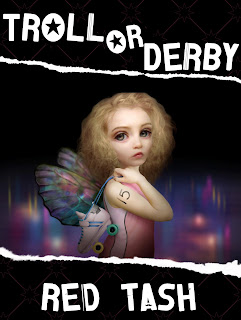 Troll Or Derby: A Fairy Wicked Tale is the story of Deb, a punk kid from the wrong side of the trailer park.  In her rural Indiana hometown, Deb can't fit in, so all she wants to do is skate away.  She's not into line dancing or partying it up, and she can't sit still long enough to escape into a good book.  No, every time Deb rolls to a stop, her alcoholic mom is hollering for another pack of cigarettes, or another six pack of Bud.  Making matters worse, Deb's portly beauty queen sister Gennifer is the town's “It girl,” a stark contrast to Deb's exceptional lack of charisma; her closest friend is either the old man who runs the roller skating rink, or the annoying neighbor who's had a crush on her since he discovered he had a penis.  As if all of that weren't enough for any girl to handle, Deb is queer, and she's starting to realize that even if that side of her personality doesn't define her, it makes her a target for high school bullies.

Skating is the only thing that brings Deb joy; the rink is the only place where she can forget her troubles and lose herself in the speed and the exhilaration of living, one blistering lap at a time.  Out on the rink, she forgets about her Mom's ever-present breakdown.  She forgets about the fact that Gennifer is dating the town sleaze, and probably using meth.  She forgets all about the bullying, the name-calling, and the hundreds of days between now and graduation.  Out on the rink, there is only this fleeting moment, and Deb is the one in control.  Skating might as well be flying, and Deb is the hottest chick on the hardwood when she straps on eight wheels.  Skates?  They might as well be wings, and someday she'll use them to fly away from this town.

Everything changes when Gennifer is kidnapped by her horrible boyfriend, and secrets begin to come out.  Deb's mother turns out not to be more like a legal guardian, the old man who owns the rink might be a troll, and Deb's discovers magical powers she didn't know she had.  Before she can stop to catch her breath, Deb's on the trail of a murderous monster and deep in the realm of the bad fae—and by bad fae, dear reader, I do, of course include trolls.

Not all trolls are baddies, though, and not everyone Deb meets is out to to tear her wings off—just most.  She soon meets Harlow, the benevolent loner who takes her in for as long as she'll stay.  A gravel-voiced rock singer who lives in a garbage dump, Harlow may be a troll, but he's got a heart of gold.  The question is, can a girl like Deb learn to trust a fella like Harlow?  Deb's fairy nature keeps her constantly on the move—can Harlow tell her all she needs to know before the lure of an illicit roller derby ring pulls her into its wicked game?

In an odyssey through Amish Rumspringa, biker bars, trailer parks, Bingo halls, flea markets, fairy realms, trolls underworlds, roller derby, tractor pulls, dungeon cells, and rock and roll concerts, Deb slowly uncover her own truth as she tries to do what's right in all the wrong places.  Love her or hate her, once you roll with Deb, you'll never see the world the same. 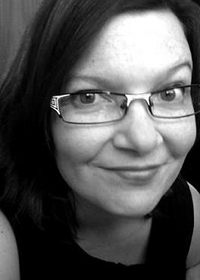 Red Tash is a journalist-turned-novelist of dark fantasy for readers of all ages. Monsters, SciFi, wizards, trolls, fairies, and roller derby lightly sautéed in a Southern/Midwestern sauce await you in her pantry of readerly delights. Y'all come, anytime.
Posted by Bethany Lopez Author at 10:33 AM