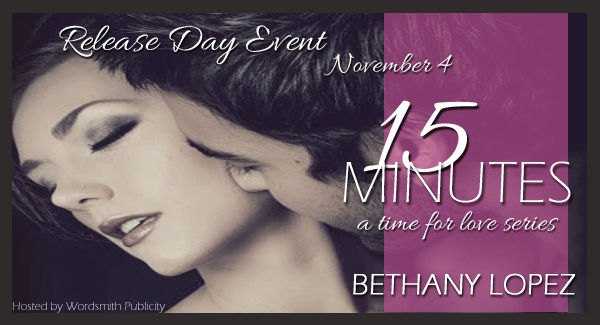 Join me in celebrating the release of 15 Minutes! 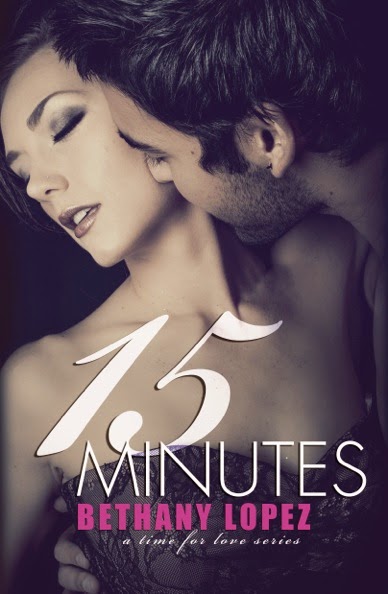 Blurb:
Raised to be the "perfect" wife, Victoria has spent her days maintaining her impeccable outward appearance and her nights mingling with the rich and entitled. When her engagement to Scott ended, Victoria thought she'd be rid of him and his circle of friends forever, but a chance encounter with Brock will change not only the way she sees him, but the way she sees herself.

Brock is a man who's happy and content with his life. A surrogate parent to his now-adult brothers, he spends his days running the company he built himself and his nights playing in his brothers' local band. When he runs into Victoria in the bar after a show, sparks unexpectedly fly, and he's interested in seeing where it goes.

But can the man who's happy with his life, convince the woman who always wants more, to give him a shot with only 15 Minutes on the clock?

EXCERPT
I was waiting for my beer when the hint of something spicy and expensive wafted toward me. I turned my head to see the back of a woman. She wasn’t dressed for a night at the bar. At least, not a bar like this one. Even from behind she looked like she belonged in a country club. Her skirt was long enough to be demure, but the way it hugged her ass clued me in to the fact that the ass was magnificent, no matter what the package. Her blouse was tucked in the skirt, and she wore stockings with her high heels. Definitely not jiving with the jeans and T-shirts most of the other patrons were wearing.

I let myself fantasize that the stockings led to garters underneath that fancy skirt, as her perfume did crazy things to my senses. I felt my dick harden as my fantasies got away from me, then the bartender interrupted by saying, “Here’s your beer, Brock,” and I saw her stiffen before she turned to look at me.

Her hair was dark brown and fell past her shoulders, straight and silky. Her face was striking. It could have been beautiful, if she’d ever fucking smile … Instead, it always looked pinched and unhappy.

“Hello, Brock,” Victoria said dryly. Her eyebrow rose as if she thought I was standing next to her on purpose.

“Tori,” I tipped my beer to her in greeting, suppressing my grin as I waited for her reaction. I knew I’d get one. “Here for the show?”

“It’s Victoria, and no, I’m not here for the show,” she answered. Even when she spoke she looked constipated.

“Why are you here then?” I asked, not because I cared, just to irritate her.

She huffed out a breath, the loss of control almost cute, then spat out, “Not that it’s any of your business, but I’m supposed to be meeting my sister. She hasn’t shown up yet.”

“I didn’t know you had a sister,” I replied before taking a pull of my beer.

Victoria watched my mouth as I drank, then my throat as I swallowed, and my dick jumped back to life of its own free will. Shit, maybe it’d been too long.I grinned when she looked up and saw that I’d caught her looking, and she scowled, “Why would you know that I have a sister? You don’t know the first thing about me.”

I stepped a bit closer, inserting myself in her space, and when she realized she couldn’t back away, she squared her shoulders and glared at me.

“I could get to know you,” I murmured suggestively, close enough for her to feel my breath on her cheek. She flinched slightly, but maintained her stiff posture.

“Why would you want to do that?” Victoria asked, her voice almost vulnerable.

Then laughter off by the dance floor grabbed her attention, and I knew she was looking over at Gaby’s table.

She pulled back and looked up into my face, and I was surprised to see that her eyes were so blue that they were almost purple.

“Don’t think just because we’re rejects of your buddies over there, we have anything in common.”

I turned my head to look deliberately at my friends, then back at her and said deeply, “I’m no one’s reject, Tori, I can promise you that.” Then I tilted my head to look at her, curious. “Are you still hung up on Scott?”

I didn’t know why, but I held my breath as I waited for her response.

She didn’t disappoint when she curled her lip and said, “Absolutely not. If he’d rather be with a mutt than a thoroughbred, that’s his problem.”

I chuckled at her haughty words and replied darkly, “You really do have a stick up your ass, don’t you. I don’t know why I like it, Tori.” I inched closer as I spoke, stopping when my chest brushed hers, and she had to crane her neck to look at me. “But I do. I’d like to help you remove it.”

Her expression turned incredulous and she asked, “Are you hitting on me?”

“I must be doing something wrong if you have to ask,” I replied cockily.

“Why?” That vulnerability flashed again, causing a fire to flick in my belly, then she extinguished it when her face pinched back up again and she asked, “Do you want to make them jealous?”

Maybe she was more hung up on Scott and Gaby than I’d thought. She had been engaged to Scott after all. They’d had a long-term relationship, so it would only make sense that it would take her longer to get over it than me.

Still, there was something about her bitchy attitude and that tight little ass that made me want a taste, no matter the circumstances.

“It could be about revenge, if that’s what you want.” I lowered my head farther and gently took the soft lobe of her ear into my mouth.

The taste was fleeting, but it was potent. Especially coupled with her astonished gasp.

I pulled away, giving her room to breath and think, drinking beer as I watched her thoughts dance across her face. I’d definitely succeeded in confusing her.

The sound of my name being called had me looking up, and I nodded when Fast Eddie indicated it was time for us to go on.

“I have to get on stage now,” I said softly. Victoria looked up at me, then at the stage, confusion on her face.

I nodded but didn’t explain.

“Hang around, watch the show … I’ll find you after.” I could tell she was ready to bolt, so I gave her one last shove, lowering my voice to say, “Just give me fifteen minutes, Victoria. Fifteen minutes and I’ll convince you to give this a shot.” I gestured between the two of us as I spoke. When she opened her mouth, I put a finger up to silence her. “No illusions, Tori. I know you’ve probably never been with a man like me, but don’t worry, I’m not offended. I don’t expect you to fall in love and take me home to meet Daddy.” Her eyebrow cocked again and I laughed; damn, but she sure was a spoiled brat.

I leaned down once more, my voice low and rough in her ear, and said, “No strings, no expectations, just pure pleasure.” I stood and finished with, “I’ll see you after the show.” Then turned to find my brothers. I was in the mood to rock the house.