It's launch day for Rise of the Faire-Amanti (Ascendant Series #3), and Raine Thomas is celebrating with a big giveaway! Read on for more details... 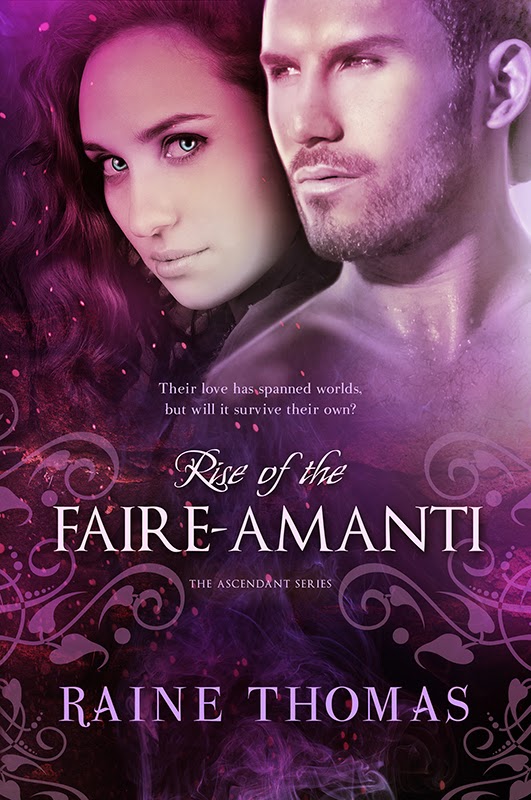 Stranded in the desolate Dark Lands, Kyr and Ty share a bittersweet reunion. Alametria lies on the brink of darkness. Their people are still reeling, believing she’s dead at Ty’s hands. With no other choice, many have turned to the Guardians and Advisor Vycor for guidance, never suspecting they’re being led to slaughter.

Kyr and Ty encounter overwhelming challenges in their fight to save their people: a deadly environment, murderous Marauders, and powerful protections preventing them from reaching the palace. When the journey itself could mean their deaths, the one thing that keeps them going is the thought of bringing VycorDane to justice.

Facing a battle on multiple fronts, lacking resources, and significantly outnumbered, Kyr and Ty must rely on each other in the race to save their planet. Will they beat the odds and restore peace to Alametria…or will Vycor’s evil destroy them all?

Turning so he faced Kyr, he lifted a gloved hand to her shoulder. Are you sure you want to do this?
She nodded, but he saw the rapid pulse in her neck belying her fear. They were both struggling to ignore the flight reflex pounding in their minds.
He considered walking to the storage bay and pulling out the sleeping pallets Gren had packed for their use, but he worried that taking even that much time would have them both abandoning this plan and giving in to the protections. Instead, he bent down and kissed her.
The feel and taste of Kyr shoved every other thought to the far corners of his mind. Although it had only been a few days since he last touched her like this, he felt like a starving man being offered a sumptuous buffet. Her soft lips eased open beneath his, begging him to deepen the kiss. He obliged, rubbing his tongue against hers as she tasted him just as thoroughly.
He ached to touch her. He broke away from her long enough to yank off his goggles and gloves. She hastily did the same. As if of one mind, they didn’t stop there, stripping out of their flight gear with quick, purposeful movements. When Ty was done, he helped Kyr remove the rest of her clothing. Then they came together in a mad rush, their mouths once again finding each other in a searing kiss.
Open your mind to me, Kyr thought. Only to me.
Yes. Only you.
He barely processed her demand over the raging need coursing through his body, but understood what she wanted. Since their first time joining here in the Dark Lands, he had learned that he had to keep a barrier between them when they made love. If he didn’t, they ran the risk of their joined power spiraling out of control like it had that time. On the more practical side, there was also the fact that if he allowed himself to feel everything she felt, their lovemaking would be over practically before it started.
Trust in us, she encouraged him as her hands ran along the muscles of his arms and chest.
Heedless of the consequences, he did as she asked, fully opening his mind to hers.

Buy Rise of the Faire-Amanti:


Haven't read the first two books in the series? Start with Return of the Ascendant today!


Buy Return of the Ascendant:

Raine Thomas is the award-winning author of bestselling Young Adult and New Adult fiction. Known for character-driven stories that inspire the imagination, Raine recently signed with multiple award-winning producer Chase Chenowith of Back Fence Productions to bring her popular Daughters of Saraqael trilogy to the big screen. She's a proud indie author who is living the dream. When she isn't writing or glued to e-mail or social networking sites, Raine can usually be found vacationing with her husband and daughter on one of Florida's beautiful beaches or crossing the border to visit with her Canadian friends and relatives.
Connect with Raine:
Facebook ~ Twitter ~ Goodreads ~ Pinterest ~Linkedin ~ Website ~ Blog
Amazon Author Page

To celebrate the launch of Rise of the Faire-Amanti, Raine is offering a Kindle Paperwhite to one lucky winner! This giveaway will only run for TWO DAYS (12/14 & 12/15).