1.   What’s the scariest thing you’ve ever heard/read/seen? It can be from a book, movie, or from the campfire at night…
By far the scariest thing I've ever seen is the movie 'IT' by Stephen King. I saw it at a very young age because my brother's thought it would be funny and I've been scared of clowns ever since. Well, that and the movie Night of the Living Dead. I watched that around the same time and zombies freak me out pretty badly too.
2.   Who would you like to bring back as a zombie? Why?
Uh.. NO. Just.... NO.
3.   What is your favorite thing about Halloween?
I love the idea that you can be anyone you want to be for a day and it is completely socially acceptable. I mean, come one... who doesn't want to dress up like a Unicorn and parade around collecting candy?
4.   What was your best Halloween costume?
I dress up as Wednesday Addams almost every year... it's just what I do because I love that creepy little goth girl.
5.   Is there an author out there that you’re pretty sure is a witch? Tell us who and why you think so!
Oh yeah. I'm 100% sure that Elizabeth Sharp has some kinda freaky voodoo magic going on behind the scenes and she doesn't want anyone to know. (LOVE YOU GIRL!)
Thank you, Jordan!!! 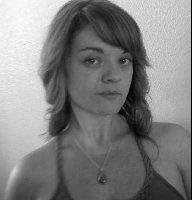 How to find Jordan:


Bio:
Jordan Deen is a Young Adult and New Adult Fiction writer from a small suburb of East St. Louis, Illinois. Her novels are a mixture of urban fantasy, paranormal, and edgy contemporary. In her free time, she loves to read, bake, attend concerts, travel, and play with her two-legged and four-legged sons. She is known for her love of quirky clothes, multi-colored hair and has a fondness for tattoos, high heels and cupcakes. In addition, she is a tech junkie that can be found most mornings and early afternoons on her tablet talking to folks on Facebook and Twitter about books, current events and music.

Posted by Bethany Lopez Author at 6:05 AM