The scariest thing I've ever experienced happened in real life about ten years ago. I was emailing with a man I met at a book fan site. I mentioned that I was writing a book, and that, among other things, I took pleasure in tormenting my characters. He said he was writing a book and also tormented characters. He wondered if I meant I tormented real or imaginary people! He said he was working on a project where he would meet a woman online and then incorporate the experience into his novel. He sent me what he had written so far. It was a story about a woman he had met at a genealogy site. It ended with him stalking her in person and moving within a five-mile radius of her home!I stopped emailing with him after that. He hounded me with emails. Then I received one saying he was traveling through my hometown and hoped to meet me! I had never divulged my information, but it was easy to find on the internet.The emails continued to come, often with subject lines like "The Pro Celery Stalkers of America." I talked to both the police and FBI, but there were no laws in place back then to protect individuals from cyber stalking. My stalker warned me that when we next met, he would be using a different name! I was terrified and suspicious of anyone new in my life for months.Even now, ten years later, I'm worried I am making a mistake by posting this online. Maybe he will see it and hunt me down! But I'm sharing it so that others might learn from my mistake. Be careful out there!

I think it would be fun to bring back the actor John Candy as a zombie! He was hilarious as a human, and would probably be even more fun as a zombie!

As a fantasy lover, I totally enjoy having one day of the year when it is acceptable by the rest of American society to dress in costume!

My best costume is one I plan to make this year for the trick-or-treaters who come to my door. I'm going to get a large poster-sized piece of cardboard and cut out the center, leaving a three-inch square frame. Then, I'm going to cover one side with do-it-yourself tint (like you put on your car windows). I will wear a dark drape or sheet and hold the "mirror" facing outward. When I answer the door, I will look like a mirror. But then, I will turn on the flashlight so that my image appears "inside" the mirror. And, of course, I'll be Bloody Mary!!! Bwahahahaha!

I'm pretty sure my good friend Alison Pensy is a witch. First of all, she grows all her own food and herbs, which she no doubt turns into potions. While we were roomies at Penned Con, she told me she takes special food supplements that give her amazing powers. One power she has is to WILL a parking spot to be available, close to the front of wherever she needs to park. She can also make traffic lights change to green! 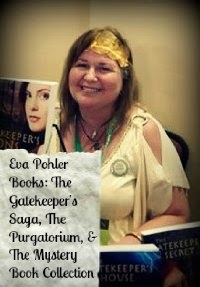 How to find Eva:

Posted by Bethany Lopez Author at 6:07 AM