I'm a visual person. Even though I've read some things that have scared me, I'm more bothered by movies. When I saw the ring for the first time in high school, I was terrified. It scared the crap out of me and I had my friend stay over that night because I was such a wuss. Well, on the way out to the car after the movie I got a phone call, but no one answered. Dead air. I know that's not how it goes in the movie, but it was still unnerving. Then the next morning I woke up with my first, EVER, bloody nose. I thought I was for real going to die.

No one! Zombies are mindless (well, except for the Warm Bodies ones) brain eaters! I wouldn't want anyone I know... wait.. maybe someone I don't like could come back as a zombie then I could shoot them in the head. ;) Just kidding, I wouldn't want to deal with zombies ever.

In high school, me, my friend, and her friend decided to be Daria, Jane, and Trent. My Jane outfit was AMAZING. I had the boots, the shirts, the shorts... it was so good. But being a teenager, something caused drama and I opted out of going all together. I'm sad that I 1) don't have a picture from that night, 2) have no fun memories of dressing up with my friends because I was being a punk.

A witch? I'm not sure that I would claim anyone was a witch since I don't know too many authors so I don't want to randomly pick someone. Sometimes I wonder what it would be like to be a witch... I'd definitely want to be a Harry Potter witch... not a Vampire Diaries or Once Upon a Time witch. I'd be BFFs with Luna, no question. Wait, what was the question? ;) 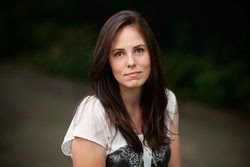 How to find Amanda:

Bio:
Amanda hasn’t always been a reader, but she’s always been a daydreamer.  Once her sister started giving her young adult books, she realized books fuel her daydreams and has since become an avid reader and a writer as well.

Posted by Bethany Lopez Author at 6:01 AM